As an ADJECTIVE: a severe self-discipline and abstention from all forms of indulgence. It is used typically on religious issues.

– Example: The girl that won the National History contest is very ascetic. She won´t accept an invitation to any party during the semester.

– Example: I accept all kinds of religions, but my neighbor is very passionate and ascetic. It bothers me that he doesn´t respect that I don´t believe in what he does.

As a NOUN: ascetic

– Example: The ascetics of my community never want to play with us.

As an ADVERB: ascetically

-Example: He works ascetically from Monday thru Saturday, 12 hours a day.

Now, we have the definition and the usings, but… Are we sometimes ascetic when it comes to perform any particular task? Is is worth working ascetically?

I think it is valid to hide ourselves on days we really need to finish whatever project we are working on. It feels right to dedicate a certain amount of time working ascetically in order to succeed. How many times have we said: “Can´t go out this weekend, need to pass this test.” But, is that really ascetic? I think if the word is used in religious matters, that means it’s supposed to be very strict.

I’d like to practice this concept more often. I wanted to use this word as the first one on the blog, because I want to remember that I need to work ascetically, I’m going to do it no matter what.

I exhort you, bloggers, to work in that way provided that you don’t miss what really is important in life: having fun! (But, would that mean we are not longer working ascetically?)

I’m hoping to hear from you so we can exchange reflections about this word.

I am beyond thrilled to announce that Hannamar at Write beside the sea nominated this blog for The One Lovely Blog Award. I can’t thank her enough for her support and the illusion she injected me. It is encouraging the fact that someone read my blog and thought it was lovely and worth it. Many thanks! 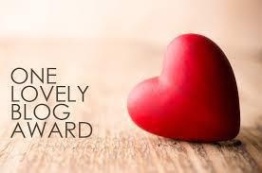 Nominations are chosen by fellow bloggers for those newer and up-and-coming bloggers.The goal is to help give recognition and also to help the new blogger to reach more viewers. It also recognizes blogs that are considered to be “lovely” by the fellow bloggers who choose them.This award recognizes bloggers who share their story or thoughts in a beautiful manner to connect with viewers and followers. In order to “accept” the award the nominated blogger must follow several guidelines:

Seven facts about this blog:

15 blogs I nominate for The One Lovely Award